So, it used to be that everyone was always saying that chameleons change their colors to hide in their surroundings. That whole idea was planted pretty deep in the cultural consciousness, to the point that the word “chameleon” became a synonym for camouflage or disguise.

Then recently, everyone got really excited about debunking that idea. You couldn’t use the word any more without someone being like, “That’s not true, you know. Chameleons don’t change color to blend in with their surroundings at all: it’s a form of communication.”

Here’s the thing: both of these factoids are actually true (or false, depending on how you want to look at it.)

Look, guys, there are over 200 kinds of chameleon. Not all of them are even capable of changing color, not by a long shot. And among those who do, some of them do use the capability for camouflage, and some don’t. The thing about using it for communication is also true …for some types of chameleon. ‘Cause, like, there’s more then one kind, you know?

Some chameleons change their appearance based on the visual abilities of specific predators that are looking for them. Which is super cool. So, maybe you or I can pick out that weird orange chameleon among those green leaves in a minute, but that snake over there can’t. Nice one, nature!

So if you see some wacky, multicolored chameleon hanging out on a branch, don’t jump to any conclusions. It might be trying to hide from that hawk over there, or it might be telling that other chameleon to piss off. To know which, first you need to know what kind of chameleon you’re talking about, then you probably should ask the nearest herpetologist, because seriously, there’s a lot to know about chameleons. 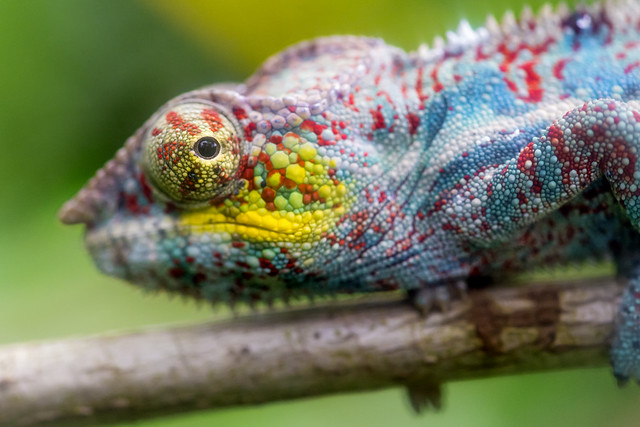 (This guy is thinking, “Do you think they can see me?” Yes, Mr. Chameleon, we can see you.)

I don’t really know where the whole “Camouflage = Chameleon” thing even started. I mean, there are lots of animals with much more impressive disguises. When I walk though the reptile house at the zoo, the chameleon is usually one of the lizards I can actually find in its cage. Whereas some of the frogs…

But the most impressive camouflage I know of is found among the octopi.

If you think there are a lot of different kinds of chameleon, then you’ll really be impressed by the octopus. There are over 300 known kinds, and since humanity has only explored about 5% of the world’s oceans, there are likely to be more kinds we haven’t discovered yet.

Like the chameleon, some (not all) kinds of octopus that change their appearance to blend in with their surroundings. But they do it way better.

Whaaaatt!! Did you see that!! That was soooo cool! Let’s see some more!

I love this stuff.

There’s really not all that much left to say about octopus camouflage. It’s really really really good, and once you’ve seen it, any attempt at description becomes pretty feeble.

(Seriously, if you didn’t watch that first video, go back and watch it now. My mind = blown.)

Did you know that octopi have eight limbs? Of course you did. Did you also know that they have blue blood? It’s true! Octopus blood is based on hemocyanin, a copper based protein that is responsible for carry oxygen to thier cells, as opposed the iron based hemoglobin which does the same job in our blood. Just as the iron in hemoglobin is responsible for our blood appearing to be red, hemocyanin causes octopus blood to appear blue.

Hmmm. The K’ul have eight limbs and blue blood. They also depend on camouflage to defend themselves in close quarters. Coincidence?

Of course not! I have it on good authority from the author that she was thinking about these things. She’s a pretty smart lady, or so I’m told.